Levende Streg has made a business animation video in collaboration with Deloitte. The video is about the challenges that CFOs and CEOs have in relation to Performance Management.

The purpose was to communicate: “We understand your Performance Management problems – and we can help you!”. The video works as a teaser sent to customers before meetings.

In collaboration with Deloitte specialists, we developed a style based on their request for a professional look, but at the same time a humorous style – without becoming “child-like”. The style is of course also adapted to fit Deloitte’s visual identity.

During the video the main character becomes more and more tired looking and worn out (shown in eyes and posture). The character has a slightly younger look than the target group, as people tend to identify themselves with people who are 10-15 years younger than them.

We chose to give the character a more international look. Thus he appeals to a broader audience.

SAME SPEAKER IN EVERY ROLL

To emphasize the humor the story, we had the idea to use the same speaker, all though the video contains several roles. The speaker instead changes his voice according to the character. The video also has subtitles to support understanding of the main message.

You can read more about Deloitte on their website. 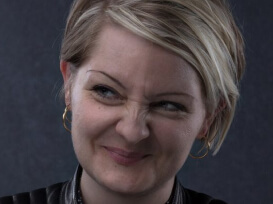 This website uses cookies to improve your experience while you navigate through the website. Out of these, the cookies that are categorized as necessary are stored on your browser as they are essential for the working of basic functionalities of the website. We also use third-party cookies that help us analyze and understand how you use this website. These cookies will be stored in your browser only with your consent. You also have the option to opt-out of these cookies. But opting out of some of these cookies may affect your browsing experience.
Necessary Always Enabled
Necessary cookies are absolutely essential for the website to function properly. This category only includes cookies that ensures basic functionalities and security features of the website. These cookies do not store any personal information.
Non-necessary
Any cookies that may not be particularly necessary for the website to function and is used specifically to collect user personal data via analytics, ads, other embedded contents are termed as non-necessary cookies. It is mandatory to procure user consent prior to running these cookies on your website.
SAVE & ACCEPT
Menu
Menu